It feels like yesterday, but most of us remember exactly where we were and what we were doing when mother nature reminded us on the impact she can have on the built environment across the ditch in Christchurch, New Zealand.

A major earthquake occurred in Christchurch, New Zealand, on Tuesday 22 February 2011 at 12:51 p.m. local time. The Mw 6.2 earthquake struck the Canterbury region in the South Island, centred 6.7 kilometres south-east of the centre of Christchurch, the country’s second-most populous city.

The damage to the building stock is well reported and the rebuilding of Christchurch is still ongoing more than 10 years later.

Fire and smoke walls were severely damaged and essential fire and other safety measures were rendered inoperable, which allows fire, post the event to destroy in inside of some buildings.

The building designers in New Zealand, Code officials and the like, just like elsewhere in the world previous after a major earthquake, had to STOP, assess what they learnt from observations post the “quake” and start designing & rebuilding more robust buildings and fitting them out with more seismic resistant walls, risers or service shafts, ceilings and the like.

This article deals specifically with services which pass through so-called fire rated and smoke proof barriers and looks at seismic testing protocols, any acceptance criteria for fire stopping systems, and discussed some work conducted by Trafalgar Fire of our Australian made FyreBOX systems which part of our ongoing research and development in seismic performance of passive fire protection or fire stopping systems. 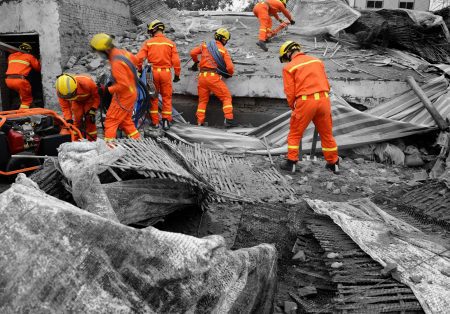 Desktop Literature Review and Google to the Rescue 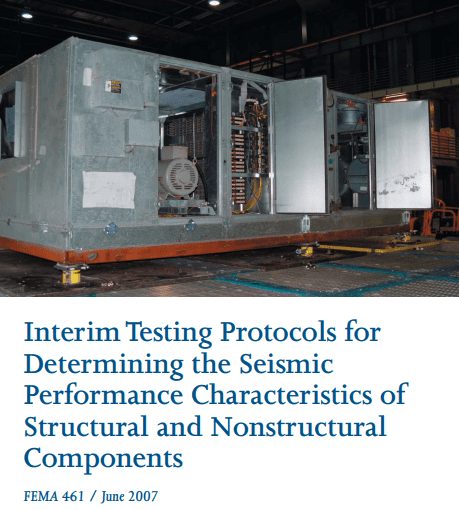 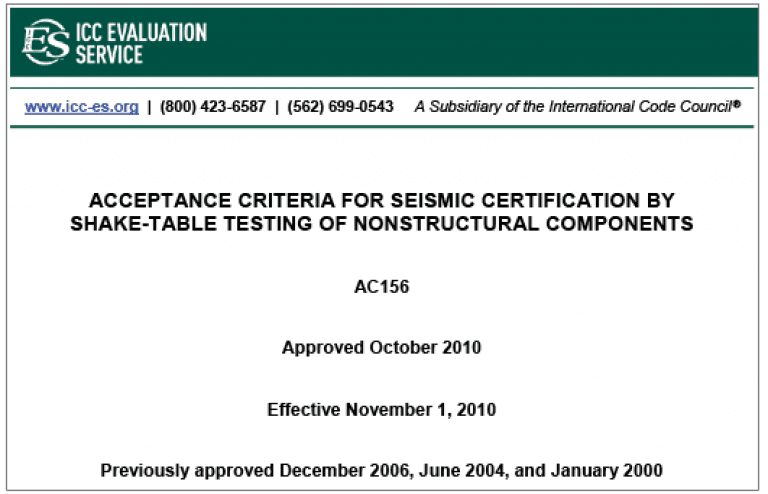 2001, saw the start of a project sponsored by both FEMA  (the USA Federal Emergency Management Agency) and the USA Department of Homeland Security. Work conducted initially by the USA Applied Technology Centre (ATC) lead to the development of some seismic design guidelines for both NEW and EXISTING buildings.
The work was also supported in part by the USA Earthquake Engineering Research Centre and the USA National Science Foundation. All this manifested itself in the publication FEMA 461 which provides different means to measures in laboratories the seismic performance of building elements.
Interim testing protocols were developed for Quasi Static Testing and for Shake Table Testing along with Functional Performance criteria and Anticipated Damage States.
As the description suggests, a Shake Table allows one to shake the proverbial out of a structure or part of a structure, simulating an earthquake and to look at the performance and damage state of what is being tested.
Just like fire testing, it makes for a fun day for Engineering folk like us at Trafalgar Fire.

Again, and thanks to our friends in the USA, The International Code Council (ICC) the ICC-ES scheme develop and publish proven techniques for products that foster safe and sustainable design and construction.
ICC-ES, AC156 was first published in 2010 and was updates as recently as 2020, and is documented acceptance criteria, for seismic certification by shake-table testing on non-structural (building) components.

Another documented test method which uses a shake-table. As written, the movement testing required is very small and moves at snail’s pace and provides little or no useful data for seismic applications.
The side-to-side movement (Y direction) on goes one way for the central axis and not back and forwards about the axis. There is no testing of up and down movement.
There is some out of plane movement (Z direction) which is one positive as we feel this is the most onerous movement orientation for fire stop materials.
Just to qualify the somewhat tongue and cheek snail’s pace comment, the movement speed in 500mm/min, so for a 50mm of movement, this is 10 cycles per minute, or 0.265 Hz.
All literature reviews we have seen suggest that frequency need to be in the order of 1.3 to 2.5Hz depending on the magnitude of the earthquake we are designing for.
So in short, unless the ASTM E 3037 method is used with this frequency, we think it is of little or no use to provide any confidence in seismic design. We asked a lot of questions from the seismic design community, especially in New Zealand where the appetite for seismic product performance was rife.

Sadly, everybody had  a different approach to seismic design and what test data they thought would be useful if Trafalgar was to commission independent seismic testing.

The design variables we identified were:

We were about to step into a new space we knew very little about. We had to now decide what movement cycles we should subject our firestopping systems to.

From first principals, we knew that whatever fire stop system we used, it would need to be compressible or somehow allow for up and down movement, but the out of plane movement was the biggest concern, as the services will have a tendency we thought, to pull the fire stopping out of the wall.

We chose our initial testing to be conducted in New Zealand and chose Holmes Solutions in Christchurch.

Some prominent seismic consultants in New Zealand gave us their wish list for the testing parameters and we decided to start our research and development program with our Trafalgar FyreBOX systems. These are a metallic box incorporating high performance graphite intumescent material, positioned centrally inside the internal perimeter of the box along with graphite impregnated foam inserts or end plugs for the end of the box. These were developed for passive fire protection of services and Trafalgar Fire have several patented applications for what we call FyreBOX. The services run through the box, and the ends are sealed around the services passing through the box with the smoke, acoustic and airtight foam inserts of end plugs.

What services do we use?

How much will the foam end plugs get damaged by movement? How much movement?

Will the foam end plugs be pulled out by the services when they move?

Will the FyreBOX assembly be capable of maintaining fire resistance and limit the movement of smoke post a seismic event?

What magnitude of earthquake?

This is going to be interesting and fun, but remember fellow Trafalgar Engineers, its COVID and money is not plentiful after months of diminished sales.

Can we get some Government funding for what Trafalgar thinks is leading edge research and hopefully providing results which will benefit the Built Environment?

Some of our Trafalgar FyreBOX 550 x 125mm boxes were sent to Holmes Solutions in New Zealand and Stage One of our Seismic journey started in 2021.

The Holms Solutions’ shake-table assembly and control equipment allowed us huge scope to experiment on the seismic performance of our Trafalgar FyreBOX. 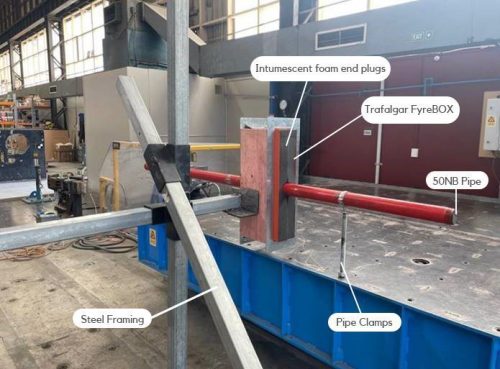 We had no idea if the foam ends plugs, which form an integral part of a Trafalgar FyreBOX would pop out, tear or what would happen to them once the shake table did it’s thing. This is we guess why we call these experiments research and developments.

We wanted to know if the Trafalgar FyreBOX did fail or perform poorly, at what displacement or movement amplitude, at what speed or frequency of repeat movement cycles.

We made an executive decision to use our FyreFLEX acrylic fire sealant around the perimeter of the foam end plugs to help them stay in place. We did not put any sealant around the metal pipe service or on the joints where the foam is cu,t to allow fitting with an existing service in situ.

Testing was conducted uniaxially, that is in one direction at a time or in other words in the X, Y & Z axis  (up and down, side to side and out of plane relative to a wall for example) individually, one at a time. 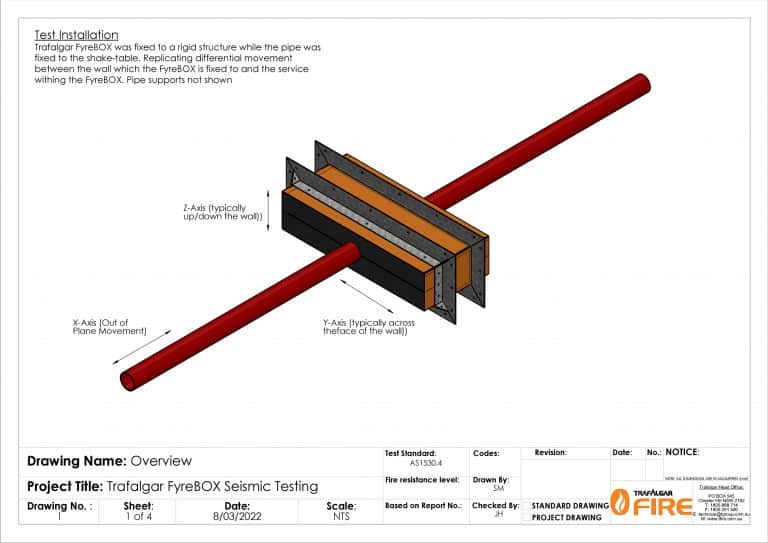 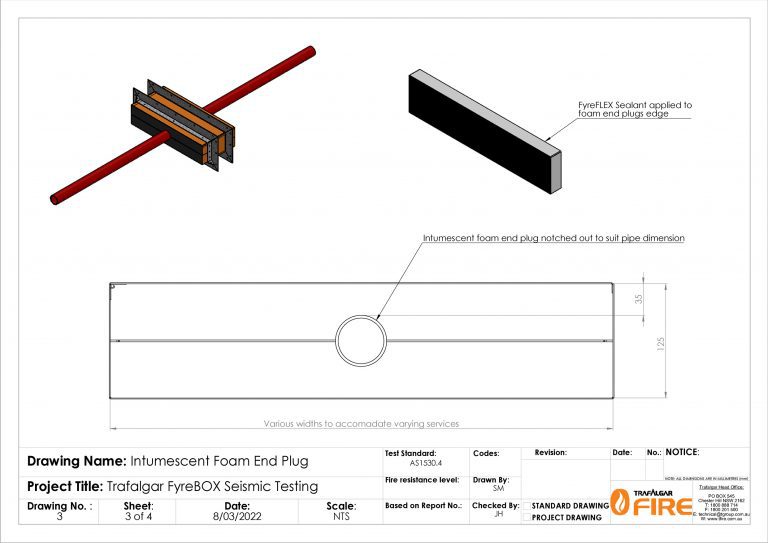 Results from the Preliminary  Seismic  Trials

Repeat at 30 and then 50mm – No significant change except in up and down as pipe was hitting on top and bottom of FyreBOX body as the internal dimension of model tested on has 125mm clearance and with a pipe of 50mm this only allow for 30mm nominal movement before interference. This caused some minor cracking or tearing of the foam.

We were happy with the preliminary trial results and this gave us the confidence to push the envelope and go for broke on a new identical specimen with serious simulated seismic activity and to have the results formally reported, for us to publish.

The following testing variables were used in the stage one formal test program:

X Axis – out of plane movement ( In and Out)

Y – side to side movement

Z – up and down movement

In the absence of any pre-established performance criteria, we developed several key variables to measure the performance of the FyreBOX penetration system. For the FyreBOX to function in fire conditions after a seismic event:
The foam inserts must not be ripped out of the box – PASS
There must not be any large through gaps through the foam inserts – some tearing was evident, but no daylight could be seen through the penetration – PASS
The FyreBOX metallic housing and flanges must not be damaged – PASS
The FyreBOX internal intumescent strips must not be damaged – PASS
Watch footage of the Trafalgar FyreBOX Seismic Test at Holmes Solution.

So, what is next? Stage Two, Three et al

The mind boggles.
This Stage One test program was just a start of our seismic testing journey.
We know it is far from definitive but we have not been able to find any firestop materials that have been seismic tested with 50mm movement, so we thought we might be leading the world with this research.

Conclusions and Thoughts Post Stage One of Seismic Testing

We need to validate a whole system, that being, services in a wall or preferably a whole room enclosure with all of our Trafalgar fire stopping systems installed.

We are comfortable that the mounting flanges for the FyreBOX Maxi system will spread the load and secure the box adequately in a wall and the overall results should be similar to those observed in the stage one seismic testing.

Probably the biggest concern for an overall system is the wall to concrete slab interface. Our research suggests that current fire rated wall constructions can provide no more than 5 to 10mm of out of plane movement without serious damage to the wall itself. There are some new innovative and patented Australian designed head of wall systems that have showed outstanding results in full scale seismic testing, which may help solve this problem

It would be nice to do triaxial testing; that this movement simultaneously in the  X,Y & Z orientations, but the out of plane results and the nature of the compressible foam end plug inserts suggest to us we will see nothing different to the Stage One uniaxial seismic testing we have already performed.

We need to do some different service types, perhaps a cable tray and cables, but again we are confident this will do well too.

Fire testing post seismic testing, just ticks a box, pardon the pun, as we know having looked at the Stage One Seismic minor damage to the Trafalgar FyreBOX, that any post seismic  fire test would be successful.