The two words, “fire rating”, together are probably the most misused term when we look at Passive Fire Protection.

If we consider the requirements of the Building Code of Australia, which most Australian Buildings need to comply with, the correct term for “fire ratings” is the Fire Resistance Level, commonly abbreviated as FRL.

It is important to understand what the different components of an FRL are, as well as how they are determined and what they mean to passive fire protection.

What is an FRL?

The Fire Resistance Level (FRL) is a grading period, represented by the time in minutes without any failures, for the following AS1530 Part 4 fire test failure criteria (expressed in a particular order):

For an assembly, the individual FRL components (namely Structural Adequacy, Integrity and Insulation) are determined from the results of a fire resistance test to AS1530 Part 4.

In simple terms, AS1530 Part 4 requires a test specimen, representative of what is to be built and installed in the field, to be subjected to a fire test using standard time versus temperature heating conditions and a standard pressure differential. 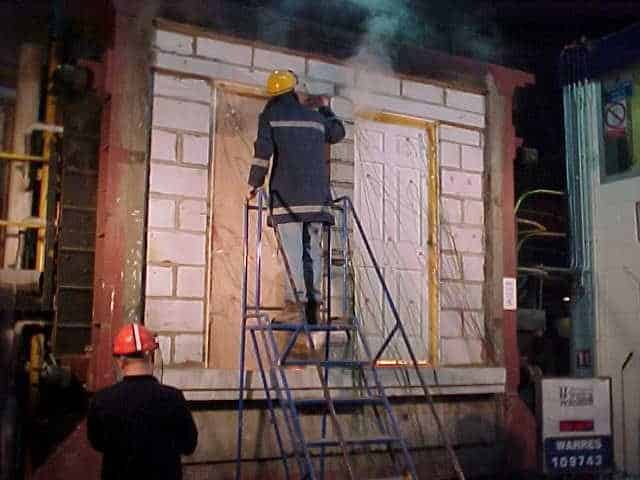 Failure criteria – what do they mean in simple terms?

Structural adequacy is a measure of a tested assembly to be load bearing (carry a predetermined load) during fire conditions.

Integrity is the measure of a test assembly to restrict the passage of flames and hot gases.

Integrity is not a measure of the ability of the test assembly to restrict smoke leakage.

Failure in relation to integrity is defined as one or more of the following:

The duration of integrity, is typically the part of the FRL that is often simplified into the so called “fire rating”.

We have provided some photos and diagram to help you understand these failure criteria better:

Continuous flaming is one measure of integrity failure

Insulation is a measure of the temperature rise on the non exposed (non fire side) of a fire resistant separating barrier.

Failure in relation to insulation is deemed to have occurred when thermocouples (temperature measuring devices fixed to the non fire side of the test specimen), exceed the following limits given in AS1530 Part 4:

These temperature limits are quite low. To give you a feel, low density timber, such as pine, require a surface temperature of in the order of 300 degrees Celsius before unpiloted ignition occurs.

This Technical Guidance Note (like others of its kind) has been prepared in good faith to provide some basic assistance to those who are not familiar with some relevant technical issues relating to Fire and Smoke Containment.

This document can be change without prior notification.