In my capacity as Technical Director at Trafalgar, my staff and I field questions each and every day on specific aspects of passive fire protection and many of these are recurring questions and relate to topical and interesting issues that those of you in the wall and ceiling industry are asking. “Fire Talk” is a means to discuss some of the issues relating to the fire stopping of service penetrations in fire rated plasterboard wall and ceiling construction.

This issue of Fire Talk could very easily be called “Smoke Talk’, as we are going to deal with Smoke Walls and openings or penetrations in Smoke Walls.

The Building Code of Australia (BCA) has recognized that smoke is the real killer in fires, and that occupants remote from the seat of a fire can be overcome by smoke, which moves rapidly and can quickly fill occupied parts of the building – including escape routes – if left unchecked.

Most of us take for granted the fact that we could move quickly in the advent of a real life fire, and escape from a building in reasonably quick time, but patients in hospitals and residents in aged care facilities are not so lucky and are often incapable of evacuating a building without assistance. For this reason, it is paramount to ensure that fire, and specifically the smoke from a fire, affects only small areas of our hospitals and nursing homes, and this is where smoke walls or smoke containment barriers play an important role in fire safety.

We have discussed in previous issues of Fire Talk that any openings in fire barriers require adequate fire protection and, of course, there are no prizes for guessing that the same applies to any opening in required smoke walls. We hope that this brief article can clarify the issues of smoke walls and the openings in smoke walls, as many AWCI members and readers of “On the Surface” have rang in seeking clarification in this area of the Building Code of Australia. There are more smoke walls required, now that the BCA has introduced a new Class 9c classification for aged care facilities / nursing homes.

Unlike the fire area, the Building Code of Australia is not as advanced in relation to smoke as smoke walls and openings or penetrations in smoke walls, and DO NOT currently require smoke leakage testing and are covered by what we called “Deemed-to-Satisfy” Specifications provided in the BCA. The requirements for smoke walls and smoke containment live in BCA Clause C2.5, which deals specifically with BCA Class 9a (health care) and BCA Class 9c (aged care) buildings or facilities, whilst the Specifications we need to meet are given in BCA Specification C2.5 (Smoke-proof walls in health care and aged care buildings).

There is no reason we could not require smoke walls and openings in smoke walls to be smoke leakage tested as we do have an Australian Standard for smoke leakage testing, AS1530 Part 7, and let’s face it, considering the importance of the smoke integrity of these walls, one would think our regulators would provide more robust and definitive requirements than we currently see in the BCA. Industry, as I like to refer to manufacturers and suppliers, are more advanced than just hoping their products work and hiding behind a loosely defined BCA specification. In this regard, many have been doing smoke leakage testing of smoke containment systems for over a decade now, and this manifests itself in the likes of fully tested smoke doors and fully tested smoke dampers, for example.

It’s a horrible thought, but let us keep our fingers crossed that we do not have o have some fatalities to see the requirements for smoke containment be more specific and robust than they currently are.

The BCA “Deemed-to-Satisfy” Specifications for smoke walls are slightly different for hospitals compared to aged care facilities, but for the purposes of this article I will deal only with hospitals.

Large hospital wards are required by the BCA to be divided into discrete sub compartments or smoke proof zones, separated by so called smoke-proof walls. This smoke containment strategy is designed to allow for the 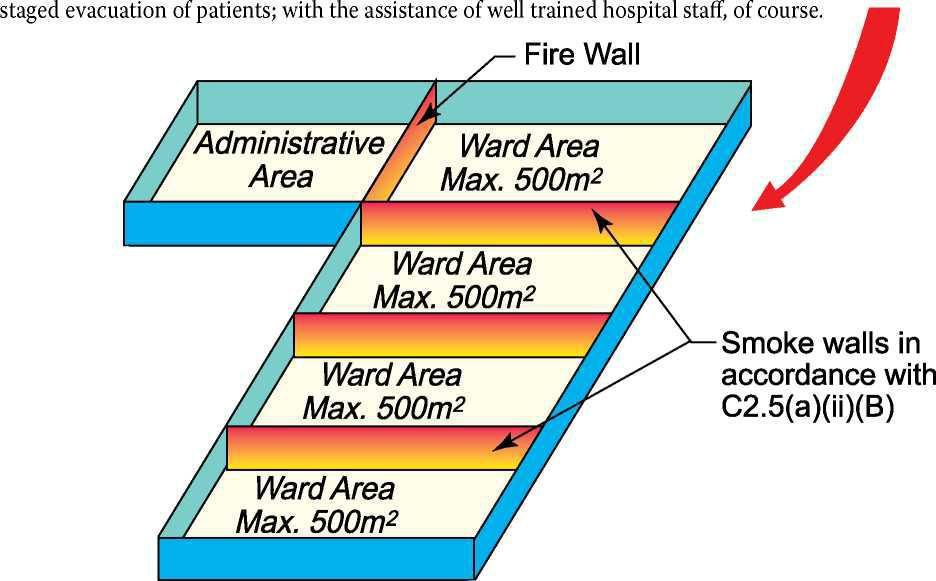 The BCA requires smoke proof walls in hospitals to comply with the following:

So what does this mean?

The BCA defines non combustible as:

Does this clarify it for you? Probably still not ………….
Let me explain it in easier-to-understand terms
A smoke wall would be considered as “a constructed part of a building”, according to the BCA definition for non combustible, so all parts of the smoke walls must be non combustible. I personally dislike the non combustibility requirements, I believe they are antiquated and unnecessarily favour certain material types against others and, as such, most of us who are close to this issue know that the old AS1530 Part 1 test really needs to be reviewed and replaced, just as AS1530 Part 3 was a few years back.

FACT – Plasterboard does not pass the AS1530 Part 1 test – the paper and some of the binder burns – so how can it be used in smoke walls you might ask? It gets a special dispensation in C1.12 of the BCA.

ANOTHER FACT – What about the paints we use to paint the walls? They too get another special dispensation in C1.12 of the BCA.

IMPROVEMENT SUGGESTION – Find a better test method for the BCA and be fair to all materials, which utilizes the concept of limited combustibility, as they do in Europe and elsewhere globally.

I looked in my trusty Lafarge Plasterboard Systems Technical Manual (thanks Ben); it said

A smoke wall must be built from non-combustible materials such as plasterboard, compounds, glass wool insulation and fire sealant.

I would probably like to see steel stud framing also in this definition, but it is a good lay person’s interpretation of what we are looking for.

I will leave it up to you to make your own value judgements in relation to smoke wall construction and components; needless to say it does not leave me full of confidence.

Specifications for openings and joints in Smoke Walls

Most of the confusion and questions we have been getting relate to openings, penetrations and movement joints in smoke walls made from lightweight plasterboard construction. The BCA requires openings and joints in smoke proof walls in hospitals to comply with the following:

So what does this all mean?

Watch out for the final part of this article in the 10th Edition of On the Surface magazine which will include Stopping of junctions and joints, penetrations, windows & glazing, doors, ducts, services and some conclusions regarding both articles. In the meantime the entire article can be viewed on our website. www.awci.org.au – look under latest news

Do you have an issue we should cover in Fire Talk?

If you have an issue you think should be covered in Fire Talk, please phone the AWCI office in your State.